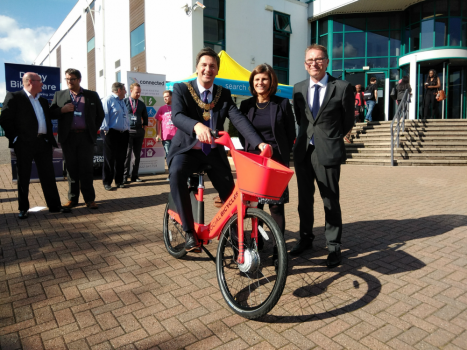 Staff and students at the University of Derby have been given the first look at the new electric bike designed for the Derby Bike Hire Scheme launching in Spring 2018.

The bike was unveiled by the Mayor of Derby, Councillor John Whitby at the University’s Kedleston Road Campus as part of its Welcome Fortnight event for students.

Students and staff, including Professor Kathryn Mitchell, Vice-Chancellor of the University, had the opportunity to take the bike on a test ride.

Hourbike, the largest bike hire operator in the UK outside of London, has been procured by Derby City Council to run the scheme in Derby.  The operator is working in partnership with Social Bicycle, who will produce the 200 electric bikes to be installed at 30 locations.

The Derby Bike Hire Scheme will be the largest electric bike scheme in the UK, and follows on from a feasibility study completed by JMP Consultants in 2016, commissioned by Derby City Council, into the viability and deliverability of a point-to-point cycle hire scheme.

From Spring next year, hubs will be installed at key destinations across the city, including the city centre, train station, high employment areas and University buildings, including halls of residence. More information on the sites will be made available before the main launch in 2018.

Developed by Derby City Council in partnership with the University of Derby, the scheme is being funded by a capital grant from the D2N2 Local Enterprise Partnership (LEP) with match funding from the University.

Mayor of Derby, Councillor John Whitby, said: “Cycle hire schemes bring many benefits to a city, and can serve a variety of markets including residents, students, workers and visitors.  It provides a viable transport alternative that will not only help to mitigate the impacts of poor air quality and growing levels of congestion in these areas, but also improve people’s health and fitness levels.”

Professor Kathryn Mitchell, Vice-Chancellor of the University, added: “The Derby Cycle Hire Scheme is fantastic news for the city and the University. It was so exciting to see what the bikes will look like, and to see our students give them a try.  I’m really proud that we are able to offer this opportunity to our 13,000 students in the city. The new scheme will encourage students and staff to swap the car and take a bike, which will lead to money savings, health and wellbeing benefits and improved air quality in the city.”